I’ve had this state planned for quite sometime! Just took me awhile to build the courage to paint it!
I chose Yellowstone because I really want to go there. And I think out of the 3 states it runs through Wyoming is most know for it.
I learned about these geyser basins and would love to see them with my own eyes! I was looking for a beach scene when I came across Harbor of Refuge Lighthouse, and I was sold! It almost looks like a ship!
I love lighthouses (yes this is the 4th State to now picture one) there is such a cool history behind every one and the lives of the keepers. In my furniture repurposing I was blessed to come upon a table that lived most of its live in Split Rock Lighthouse! It’s in storage for now but it will be in my house someday ❤️ Once I decided on the ocean scene for SC I knew NC would be mountains! I just had to decide on the right scene! I found Blue ridge parkway and was in love with the spring/summer photos because of the beautiful contrast of flowers in the foreground and deep greens! Such a cool overlook with the hint of a lake or river This Park caught my eye when I was researching for this state! I loved the simplicity of the trail and this view on a nice sunny day. Totally somewhere I’d find myself hiking! The sailboat was a last minute detail to help complete the scene. I’d been avoiding this crazy shape while trying to find the perfect scene haha! Calvert Cliffs looked like such a beautiful beach! I knew I had to make it work! With the shape and such a small amount that goes into this scene, I knew I had to work extra hard to make it shine just a bright!

I often get asked why I didn’t paint DC too but this map was meant to focus on landscapes and the gems from each state. A DC painting may be in the future! I got some location suggestions from my moms friend that grew up here. And Brown County State Park was the winner once I saw pictures of it in the fall! It’s my favorite season and I always wish it lasted longer. Getting to paint it for states on the map makes me want to see them in the fall all the more. I had so much fun with the refection on this one! I really wanted to do a pier for one of the states and realized I was running out of coastal states to pick from! Finding the pier in scene really was the ticket for me! I’m not sure exactly where in NJ this is. Hopefully some locals can help me find out!

This painting quickly became one of my best sellers and gets a lot of love! Sweet home Alabama 🎸
My original idea for Alabama was a lot different, and I’m glad I left this state alone long enough for it to change! Cheaha State Park popped up with this incredible overlook and my mind was set on this new idea! I was really happy with the detailing of the tree and how it came out. Louisiana, in the Bayou! Early on I came up with the idea to do a few night scenes. I knew I wanted MI and it’s UP top to have stars. And the Utah idea followed! But then I needed a state lower to tie it in... My Sister Elizabeth came up with this idea and I fell in love! It just took me quite awhile to work up the courage to paint it!

The inspiration from Elizabeth stated with a scene from the princess and the frog. Then looking through lots from Louisiana Bayou photos to build this scene. 💙 I’d been saving WA as it was the last west coast state. Like Oregon it’s one of the states I wanted to see most! The Emerald Isle of the States.💚I was pretty sure I wanted to paint something from Olympic National Park and was able to look through vacation pictures from a craft friend, where I found Cape Flattery that’s on the Olympic Peninsula. Those west coast rocky beaches have my heart, it’s no wonder I’d pick here!

WA marks the second state that I’ve seen after I painted it. I got to go in early August 2019 and see both the Olympic Peninsula and Olympic National Park. It’s safe to safe I wasn’t wrong about knowing I’d love this state! Seeing Cape Flattery was breath taking because it really was how I’d imagined it! 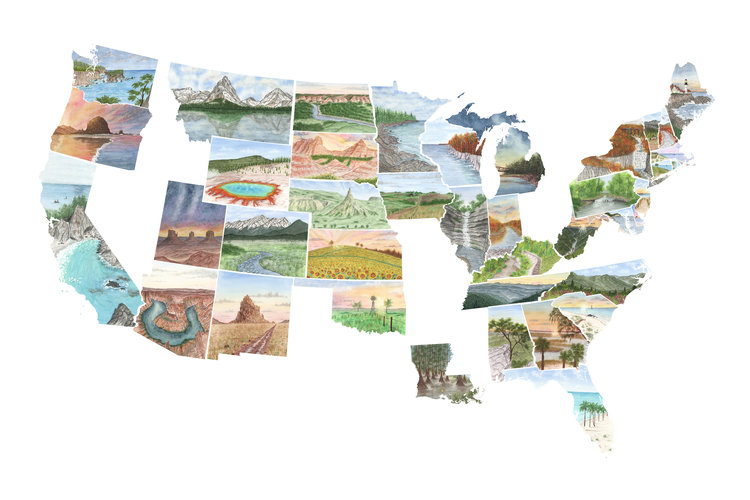 "Follow Me Down" Looking For Some Light Collection
July 2, 2020

"This is Home" Looking for some Light Collection
July 1, 2020

"Hope is a Seed you have to Sow" Looking for some Light Collection
June 29, 2020

Guide You Home "Looking For Some Light" Collection
June 23, 2020